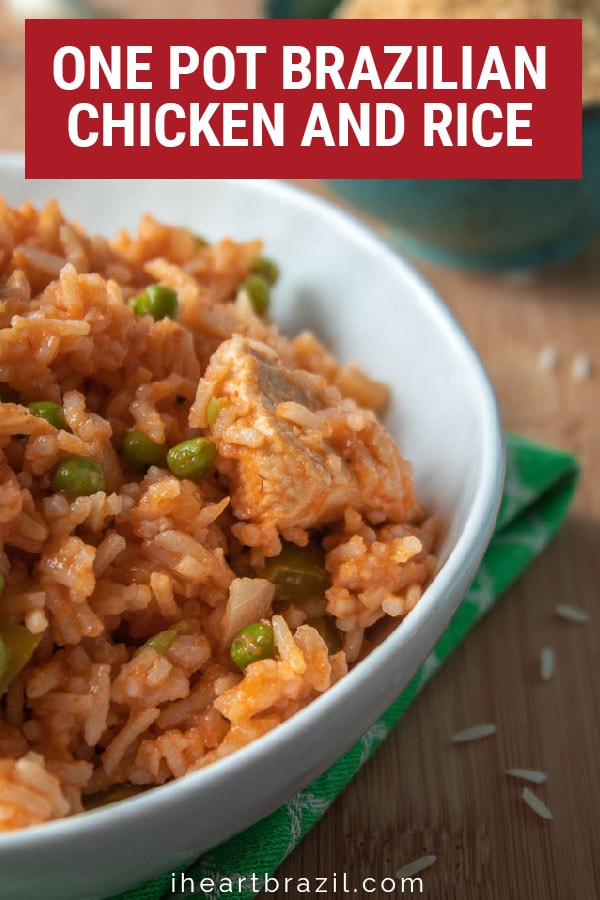 This post may contain affiliate links and I earn from qualifying purchases. For more information, feel free to check out my affiliate disclosure.

Easy and tasty, you can’t go wrong with this one-pot Brazilian chicken and rice dish. I’m sure this hearty galinhada recipe will win a place in your recipe book.

It’s not a secret that Brazilian food is not only hearty but diverse, just like the country.

From ingredients to ways of preparing the dishes, Brazilian cuisine is, without a doubt, diversified.

And galinhada is one of the dishes where we can clearly see the international influence.

Galinhada is by far one of the most traditional Brazilian chicken recipes. Well, at least in the central-southern half of the country.

The galinhada is a typical Midwestern dish made with rice, chicken, and vegetables. (Galinha means “chicken” in Portuguese.)

In fact, Brazilians love rice and we eat almost every day one of our Brazilian rice dishes. (Usually paired with brown beans.)

From which Brazilian state does galinhada come?

Some say this Brazilian recipe comes from Goiás, others say from Minas Gerais. In fact, no one knows where it really came from.

But it’s important to know that each state uses different ingredients when preparing the famous Brazilian chicken and rice dish.

However, because my mom comes from Minas Gerais, we’ll prepare the galinhada recipe from that Brazilian state.

(Which in a way it’s better for you because where will you find pequi if you’re not in Brazil?)

That’s the recipe I often had at home and the one I learned how to love. I hope you’ll too.

Galinhada is a tasty one-pot meal and by far one of the most straightforward Brazilian main dishes to prepare. It’s ready to serve within one hour.

But before talking about its instructions, I’ll briefly tell you the origins of this famous one-pot Brazilian chicken recipe.

Legend has it that the Portuguese descendants who worked as Bandeirantes (slaves and precious metals’ hunters) in the 17th-century used to prepare a stew of rice and chicken for themselves.

And because the route most traveled by these hunters crossed the states of São Paulo, Minas Gerais, and Goiás, galinhada became popular in this region.

Later, this recipe was adopted by the tropeiros (drovers) who also used the same roads to move their cattle between the states.

These drovers also came up with their own dish, which is a perfect hangover cure, the feijão tropeiro.

Feijão tropeiro is a hearty dish with brown beans, cassava flour, eggs, sausage, and more. It’s delicious. No worries, once I write about it, I’ll link it here.

Tips for a perfect galinhada

This galinhada recipe is a one-pot meal, therefore rest assured it’s quick and easy to make.

Dissolve a bouillon cube in half a glass of water and mix it with lemon juice for the marinade.

Place the chicken and marinade in a closed, non-reactive container, such as a glass container or resealable plastic bag. Put it in the refrigerator.

Meanwhile, chop and dice all vegetables and boil the water in a tea kettle. Put it aside.

After the chicken has marinated, heat olive oil in a large pan over medium heat and add the chicken pieces. Cook until golden brown, approximately 6 to 10 minutes.

In the same pan, sauté the onion and garlic for 2 minutes. After that, add the rice, tomato paste, bell pepper, and water, stirring well.

Cover the pan, turn down the heat, and cook for about 15 minutes until the rice has absorbed most of the water.

Add the peas and mix. Remove from heat and transfer to large a serving bowl.

Sprinkle the parsley and serve next. Bom apetite!

Bruna was born and raised in São Paulo, Brazil, and traveled extensively throughout the country. She studied Economy in college and Brazilian Culture at home. She loves helping people to get make the most out of their Brazil trip. Bruna is also an expert in Brazilian food and is more than happy to teach you, dear reader, all of her mom's and grandma's recipes.

The 5 Best Caipiroska Recipes to Sweeten Your...

I Heart Brazil is Bruna’s project to show the best of Brazil, from North to South.
This is your one-stop website for all things Brazil travel, culture, and of course, for delicious Brazilian recipes. Join me on this adventure!