Skip to Content
Oh yes, affiliate links may be sprinkled throughout the awesome, free article you see below. I'll receive a small commission when you purchase from my links (at no extra cost to you). For the full scoop of what this means, please read my affiliate disclosure.

Sweet and with tropical hints, Brazilian cocktails are delicious and easy to prepare.

Most of them are made with cachaça, our local spirit extracted from sugar cane.

Although some people outside of Brazil call it white rum, these liquors are in essence and taste very different from each other.

But I get into it in this post, for the sake of keeping it on topic – I’m here to give you some fantastic Brazil cocktail ideas. (The most popular ones!) 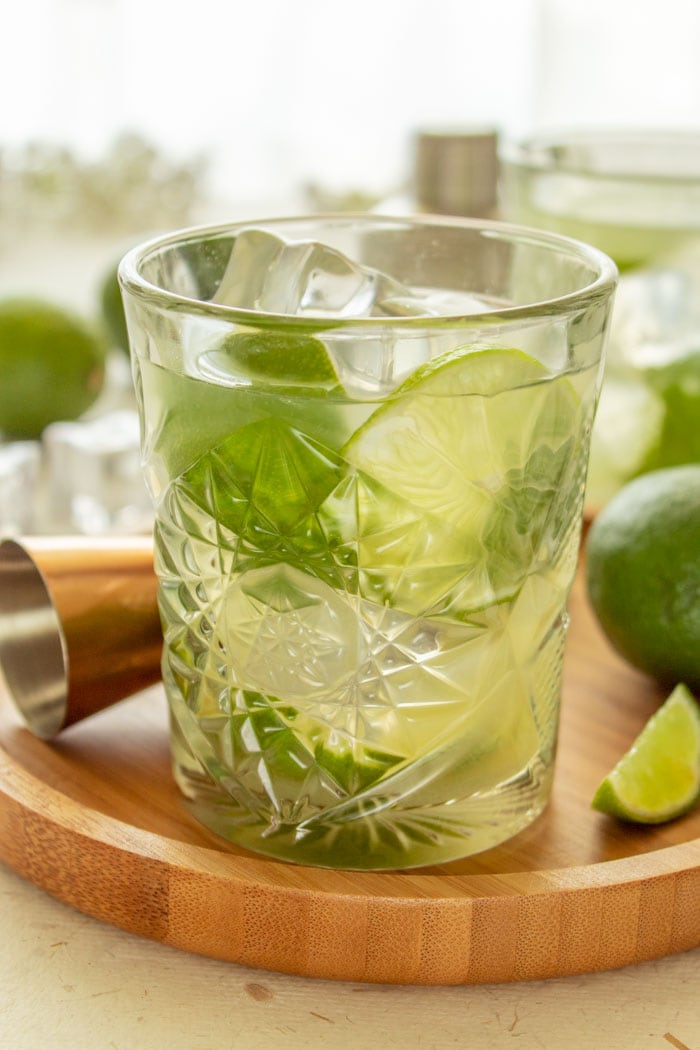 Caipirinha Recipe By a Local: The National Drink of Brazil

The national cocktail of Brazil, the caipirinha, is refreshing and easy to prepare. In fact, if you had all the ingredients at home, you could be sipping caipirinha within 5 minutes!

This Brazilian cocktail is made of cachaça, lime, and sugar on the rocks. As mentioned, cachaça is a local spirit with grassy hints between 38-48% ABV.

And while the original caipirinha recipe takes cachaça and lime, we Brazilians created some tasty and equally easy variations.

Tip from a local: Caipirinha is the perfect match for feijoada, the most traditional Brazilian food.

The literal translation of leite de onça is jaguar’s milk.

This Brazilian cocktail has this name because it looks harmless, like a pure glass of milk.

But once you’ve had your first sip, you realize how strong it really is.

In America and beyond, people drink a similar cocktail called Alexander. So you can call it a Brazilian Alexander cocktail.

Leite de onça is made of cachaça, cream, cocoa liqueur, and sweetened condensed milk. Some people use cinnamon or chocolate powder to garnish, but that's up to you.

It’s a delicious cocktail to sip on a warm summer evening outdoors.

The batida is a sweet creamy drink, and it may or may not have alcohol. Batida literally means “shaken” in English because all of the ingredients are mixed together in the blender.

Anyway, as said, to prepare this drink, all you have to do is to blend all ingredients in the blender and that's it.

Batida is made of a fruit of your choice, sweetened condensed milk, crushed ice, and vodka, or cachaça.

Some possible combinations are passion fruit with vodka, peach with champagne instead of the spirits mentioned above, and pineapple with champagne.

But the most popular variation in Brazil is batida de coco, or in English, coconut cocktail. 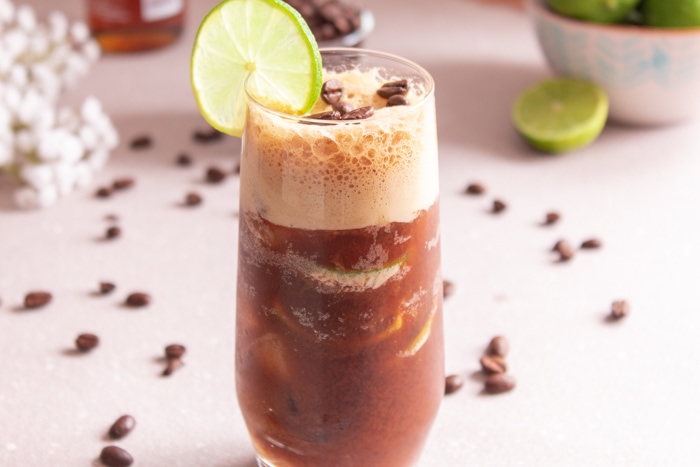 It's the traditional Brazilian cocktail you know, but with a punch of coffee flavor!

This caipirinha coffee is a delicious alcoholic drink for warm summer days. Besides, you only need a few ingredients to make this cocktail.

If you're a coffee-lover, this (easy) recipe is a no-brainer! 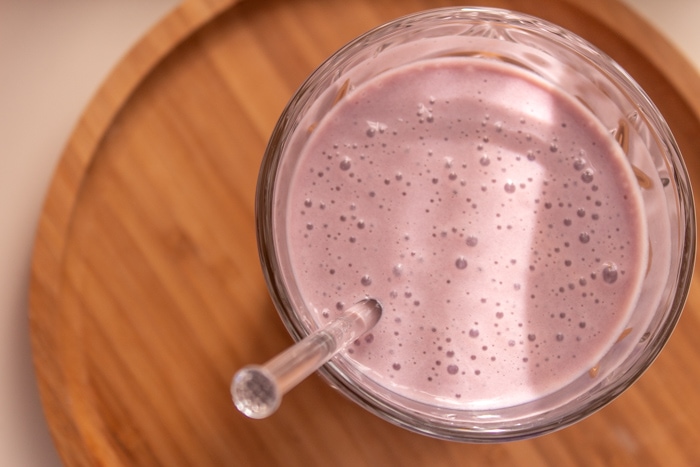 The espanhola, which in English literally means “Spanish” when referring to a woman, is an easy and tasty Brazilian cocktail.

It is made of wine, our good ol sweetened condensed milk, pineapple, and ice cubes.

All ingredients are mixed in the blender, and the result is a smooth, sweet pink cocktail.

Don’t let its “soft” appearance trick you. I’ve seen many people get tipsy (sometimes tripsy) because they had one too many glasses of this red wine cocktail.

Its sweetness and pink color seem harmless, but that’s where the problem lies.

It’s the same as drinking a whole bottle of wine. Oh, the headache the next day…

Are you looking for a refreshing drink for this summer? Then you'll love this Brazilian sunrise cocktail!

It's the sunrise cocktail you know, but with a Brazilian touch!

And it only has positive points: It's easy to make, looks beautiful, and it tastes great! 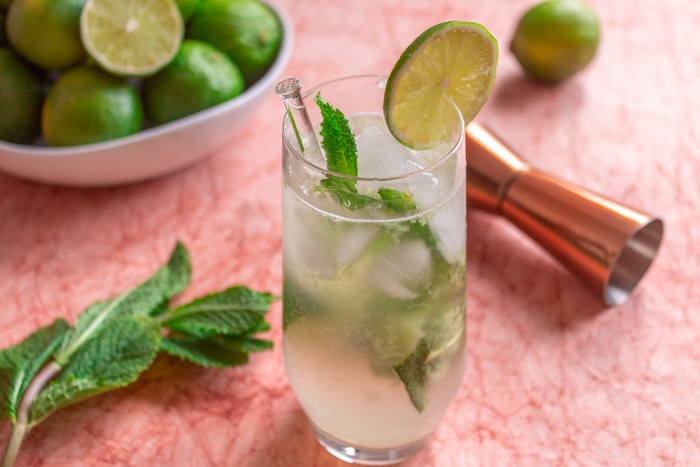 You can't go wrong with this Brazilian mojito recipe!

It's an easy and popular Cuban summer drink with a Brazilian twist.

Brazilian mojito is made of cachaça, lime, mint, club soda, and sugar - so refreshing!

You'll love this cocktail! Check it out! 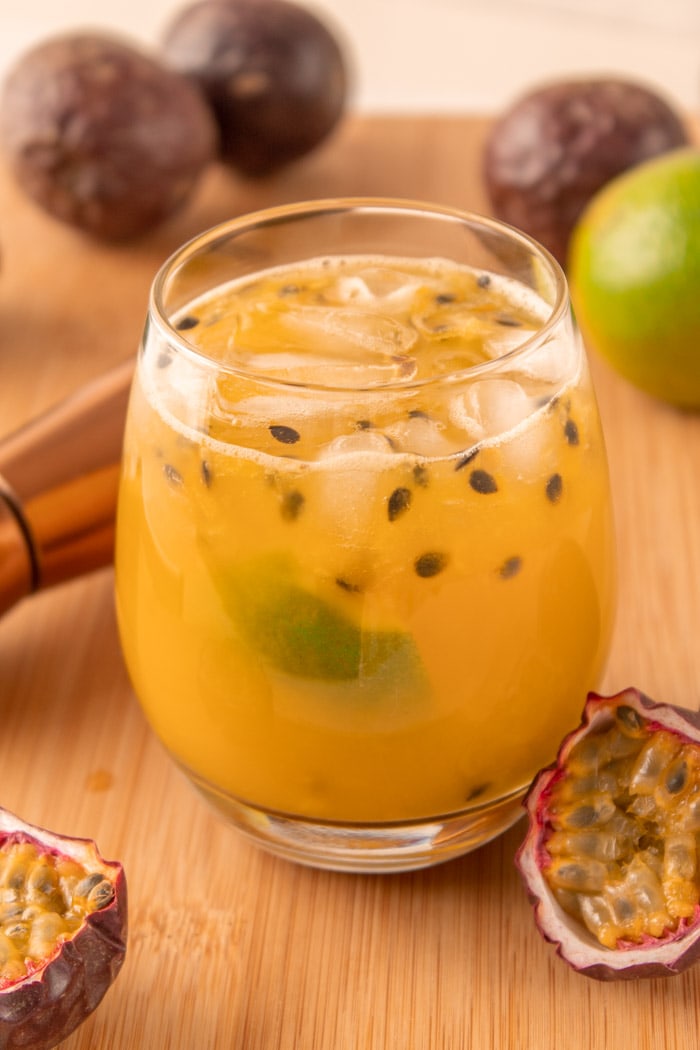 This refreshing passion fruit caipirinha has such a tropical flavor that it will transport you to Brazil after a couple of sips.

This Brazilian cocktail is sweet and has a slightly grassy and tart aftertaste. The seeds not only give this passion fruit cocktail a bold look but also add a delicious bite to it.

Mind you, June is the first month of winter in Brazil. Not that it freezes outside, but it does get pretty chilly for Brazilian standards.

That’s why it is so delicious to drink a warm vinho quente during these June Parties when we gather to dance, eat, and drink outside.

This cocktail was created in the southern region in the 19th-century, where the communities of European immigrants were much more considerable than in the other areas of Brazil.

Vinho quente is made of wine, water, sugar, lime, cinnamon, cloves, and pieces of orange and apple. Unlike mulled wine, this drink has bits of fruit in it, which gives a tropical touch to it.

Quentão is another drink typical of the Brazilian winter that is very popular during the June Parties.

This Brazilian cocktail is basically made of cachaça, water, sugar, ginger, cloves, and cinnamon.

However, there is a lot of confusion in Brazil regarding quentão and vinho quente.

In some regions, people call quentão the drink with wine instead of the one with cachaça, for example.

So when traveling in Brazil, if you see a stand selling this drink, be sure to ask if it’s made with wine or cachaça to make sure you’re ordering the right one.

Xiboquinha appeals to all audiences, but it fits perfectly young people who are always looking for new drinks and cocktails.

The drink is a tasty blend made of cachaça, honey, lime juice, cloves, cinnamon, and spices.

There are several ways to enjoy a xiboquinha, such as pure, with ice, with coconut water, or with other drinks.

While you can prepare this Brazilian cocktail at home, there is a bottled version of it at 22% ABV.

For me, the homemade version of xiboquinha is much tastier than the industrialized bottle.

The caju amigo, which in English literally means “friendly cashew,” is a cocktail that mixes a typical Brazilian fruit with vodka – the cashew apple.

Caju amigo is made of a canned cashew apple, a little sugar, concentrated cashew juice, ice cubes, and vodka, of course.

The cashew apple’s dry touch mixes perfectly with vodka in this tropical cocktail.

Obviously, it’s not a surprise that this summer drink is so popular throughout Brazil.

As you might have noticed, we Brazilians have a sweet tooth. Not only many of our desserts have sweetened condensed milk but also plenty of our drinks.

It might sound too much, but since we don’t drink them so often, it’s ok.

If you want to learn some cocktail recipes, check out here my archive on the best Brazilian drinks you could be sipping at home right now.