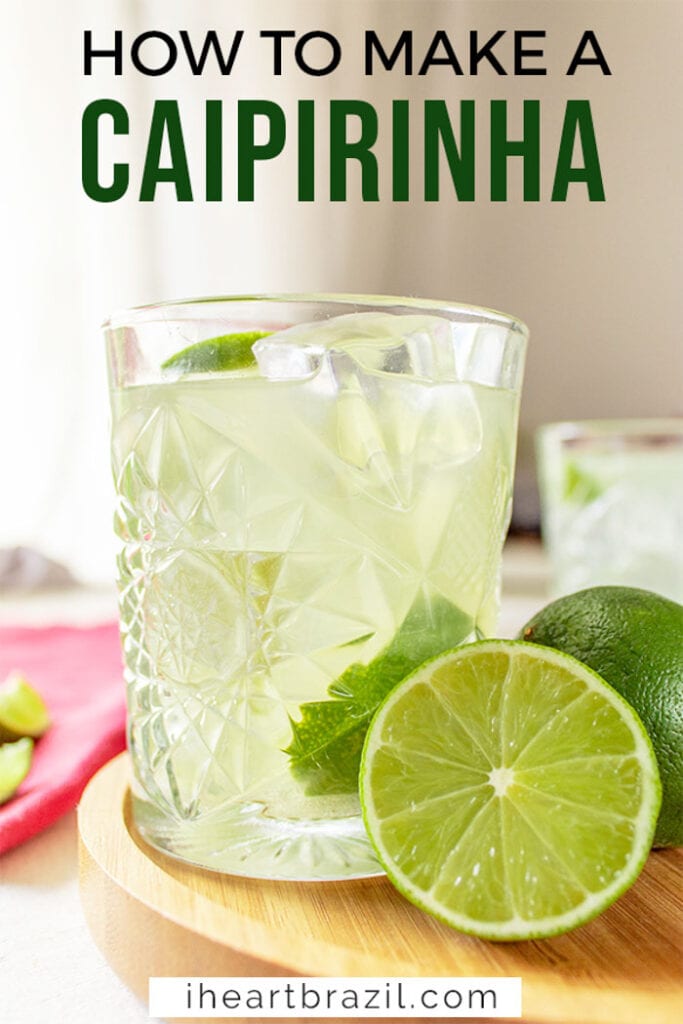 This post may contain affiliate links and I earn from qualifying purchases. For more information, feel free to check out my affiliate disclosure.

This caipirinha recipe is pretty straightforward and delicious to sip with friends or family on a sunny day.

The Brazilian national drink, the caipirinha, is a refreshing cocktail we simply adore.

Spending a day at the beach without having at least one caipirinha sounds like an incomplete day to many Brazilians, including me.

(Drinking caipirinha is a must-do in Brazil!)

This cocktail is very simple to prepare, and it requires only a few ingredients. You probably have most of them in your kitchen, except the spirit, which is obviously Brazilian.

This spirit, which is basically the main ingredient in a caipirinha, is called cachaça. It’s a Brazilian alcohol drink that is funky and vegetal.

And as every distilled drink has its own signature cocktail – rum has the mojito, tequila has the margarita –, cachaça is a must-have for a caipirinha.

Learn the right caipirinha recipe from a local

As a Brazilian who traveled extensively around the world, I can tell you that I’ve only had one caipirinha abroad that I actually said, “that’s a good one.” It was in Lisbon.

The other times I had this drink, they were too sweet, too strong, too bitter, or watery.

That was something quite interesting to learn because, as you will see, the national drink of Brazil is pretty easy to prepare.

So here’s my personal recipe for caipirinha. I hope you enjoy this Brazilian cocktail as much as my Dutch husband and I do.

Before we talk more about this caipirinha recipe, let’s talk about its main ingredient – the cachaça.

Cachaça is a Brazilian spirit made from sugar cane and has an ABV between 38-48%. Anything softer or stronger is considered brandy.

Also, for a spirit to have the denomination of cachaça it must be extracted from sugar cane and produced in Brazil.

Fun fact: There’s no such thing as Brazilian cachaça. This is redundant. All cachaça is produced in Brazil, otherwise, it may not have this name by law.

This drink should primarily reveal the aromas and flavors of sugar cane and secondly the aromas of the fermentation.

Besides ethanol, other components such as aldehydes, esters, and acids are present in cachaça and they all contribute to the formation of its identity as a rich and tasty drink.

It’s similar to white rum, but still quite different. Cachaça differs in that it’s not made from sugar cane molasses but the cane juice itself, lending it a more floral, grassy, herbaceous flavor profile than its rum counterparts.

I received these questions through my Instagram account and I decided to add it here so you can benefit from the answers as well.

What’s the difference between a mojito and a caipirinha?

Although mojito and caipirinha are similar, they taste completely different from each other. Besides rum, sugar, and lime juice, the mojito is a cocktail that also consists of soda water and mint.

This gives this Cuban drink a herbaceous mint flavor and makes it not so strong as caipirinha.

So no, the caipirinha is not the same as mojito as many people believe.

If the bottle is still closed, it can last up to 20 years. After opened, the contact with the oxygen might slightly change its flavor, but it still can be stored for years.

How strong is caipirinha?

Since its main ingredient is considerably strong, somewhere between 38-48% ABV, the caipirinha is a tricky cocktail.

That’s because the addition of sugar and lime juice with ice tricks you into believing this Brazilian drink isn’t going to get you tipsy. Wrong.

Caipirinha is a refreshing drink that tastes like a sweet lime juice with a grassy aftertaste. Its simplicity makes it an excellent drink for a hot day on the beach or for a barbecue with friends.

But for a sweeter cocktail, you might want to try a strawberry caipirinha instead. Oh, and if you’re a coffee-lover, don’t miss my caipirinha coffee – it’s delicious!

As mentioned above, caipirinha cocktails have a high proportion of alcohol compared to the rest of the ingredients.

For that reason, be sure to sip it and enjoy it slowly. Because caipirinha is a fresh cocktail perfect for the summer, you can easily drink it as if it was juice, but when you get up to go to the toilet. Oh, my. Then you realize how strong it really is.

That’s why this cachaça drink is tricky. You drink it without really tasting the booze, just the fresh fruit, and after a few hours, you realize you probably had one too many drinks.

Pssst: Brazilian lemonade is a delicious non-alcoholic and refreshing drink with…lime. A bit crazy, I know. But it’s very, very tasty and perfect for hot days!

Tip from a local: Caipirinha is the perfect match to a black bean stew, aka feijoada.

What you will need to prepare your caipirinha cocktail

Tips for making the perfect caipirinha

How to make caipirinhas

This Brazilian cocktail is easy-peasy to prepare. Once you have the ingredients for this caipirinha recipe, you could be sipping your drink in less than 5 minutes.

Wash the lime before cutting it in half, lengthwise. As said, be sure to remove the pith to avoid a bitter taste in your caipirinha.

Put the lime pieces with the flesh up in the cocktail shaker, and add the sugar on top of them.

With the muddler, gently press the lime pieces to release the juice.

Muddling requires some technique but the key is to wake up the aromas of the fruit without bruising it.

Bruising the lime releases a chemical that damage the taste of cocktails, so a muddler helps you release the juice of the fruit in a gentle way.

Next, add the ice cubes and cachaça to the cocktail shaker. Close it and shake it, baby.

Shake it for a few seconds before pouring it into your glass. Your hand will get cold pretty fast so be quick.

If you’re muddling it in the glass, simply add the ice cubes and cachaça, and stir well.

If you wish, you can garnish the glass with a lime slice.

Bruna was born and raised in São Paulo, Brazil, and traveled extensively throughout the country. She studied Economy in college and Brazilian Culture at home. She loves helping people to get make the most out of their Brazil trip. Bruna is also an expert in Brazilian food and is more than happy to teach you, dear reader, all of her mom's and grandma's recipes.

The 5 Best Caipiroska Recipes to Sweeten Your...

I Heart Brazil is Bruna’s project to show the best of Brazil, from North to South.
This is your one-stop website for all things Brazil travel, culture, and of course, for delicious Brazilian recipes. Join me on this adventure!